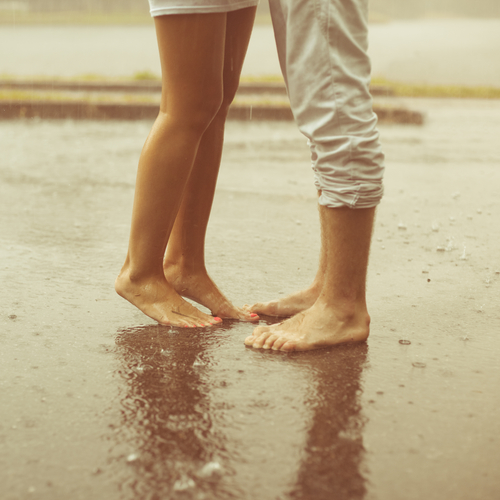 If you ever get the feeling of déjà vu when watching a movie, it’s probably because the film is rehashing some tired old plot that you’ve already seen a million times. One of the worst offenders for this is the date movie genre; while these romantic movies can be entertaining, they also tend to be repetitive and predictable.

Let’s take a look at some of the worst clichés and consider what might actually happen if these occurred in the real world of dating:

1. Romantic Scenes in the Rain

If you’ve seen movies like The Notebook, you know this one quite well: two lovers run towards each other in a downpour and then cling to each other while they declare their undying love.

As Mashables notes, in real life, the only clinging that would be happening in this scenario is the couples’ clothes to their bodies. While getting soaking wet is supposed to add to the romance of a moment, most couples would probably say, “Hey, it’s pouring out here—let’s get inside and continue this hug indoors.”

As The Dig notes, the ugly duckling plot has been used ad nauseam in date movies—Clueless and She’s All That are just two examples. In a nutshell, the dude loves the gorgeous lady, while his “Plain Jane” friend plays the role of confidant. The guy doesn’t seem to realize that the average gal is perfect for him—not until she undergoes some magical makeover, which usually involves switching from glasses to contacts and frumpy clothes to fabulous threads.

In the real world, while men and women can be initially shallow about another person’s appearance and find gorgeous people more attractive than plainer ones, most are able to see past the exterior to find the amazing interior qualities. Plus, most self-respecting gals and guys wouldn’t even want to date someone who had no interest until they improved their appearance.

Here’s a story line that’s especially ready for retirement: the dumped boyfriend tries to make his ex jealous by using another woman, but along the way he learns that he is falling in love with the new person. This tired plot is used in American Pie 2, Addicted to Love, Drive Me Crazy, and many other date films.

In real life, most people would realize pretty quickly that they were merely a way to get back at someone else, asking things like, “You know, is there a reason you always take me to the Starbucks where your ex works?” Being used stinks, and most women and men will not stand for it.

When Harry Met Sally is a prime example of this cliché: two people who clearly have the hots for each other bicker and fight for 100 minutes until they finally get a clue and get together. You’ve Got Mail and Bridget Jones Diary also rehash this storyline. While these movies are definitely entertaining, the audience is usually ready to scream, “Just kiss him already!” after the first 10 minutes.

While endless arguing can have that old married couple quality to it, it can also be exhausting. In the real world, the plot would go like this: cute woman meets cute man; they bicker over anything and everything; they both realize that the other is a pain in the butt, and they move on.