Turning the Tables on Speed Dating 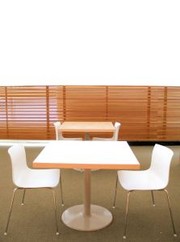 Earlier this year, we found an article on the internet called "Which Sex is Pickier", detailing a "speed dating":http://www.25dates.com study at Northwestern University. If you've tried "speed dating":http://www.25dates.com with 25dates.com or any other company for that matter, you'll know that traditionally we have the men rotating from table to table while the women stay seated. The Northwestern study, in which 350 undergrads participated, had women seated for 8 events, and men seated for the remaining 7 events. What they found was very interesting. Regardless of gender, whomever was rotating experienced more confidence and romantic desire (as indicated by their responses) after each date. Participants then went to a website to enter their picks, and the study found that those who were rotating were more enthusiastic to see their potential mates again than those who were seated. Said co-investigator Eli Finkel, PhD and associate professor of social psychology at Weinberg College of Arts & Sciences at Northwestern, "Given that men generally are expected - and sometimes required - to approach a potential love interest, the implications are intriguing. The mere act of physically approaching a potential partner, versus being approached, seemed to increase desire for that partner." So after almost eight years of conducting our events the "traditional" way, we decided to turn the tables so to speak, and have the women rotate at our December 9th event for Men & Women aged 25-35. From a purely observational standpoint, and we've observed hundreds of "speed dating":http://www.25dates.com events over the years, we noticed the following: 1. The energy in the room was different. Simply reversing the seating process seemed to cause the men to relax, and the women to be of higher energy. 2. The women's confidence level was different. When being the ones doing the "approaching", the women seemed to be in a more outgoing state of mind. Instead of waiting for their next date, they went to each date with more confidence, and seemed to be putting more effort into starting and directing their conversations. 3. It appeared that both men and women enjoyed the role reversal and had a great time with it. Best of all, we had a higher than average match rate for this event (which already is quite high at 75%), and have decided to do this for every age group in the month of January. Please post your comments and thoughts - especially if you attended the Dec. 9th event - we'd love to hear them!
Tags: speed dating  speeddating  confidence  outgoing

I think there should be a category of Single Women and Men called "The True Love Group" for daters looking for a serious relationship leading to marriage. from 21- 39 for women AND men. Instead of 25-35 age groups only. I mean it takes a man a good 10 years to save up to buy a house these days. So he's in his mid to late 30's, and he's looking to find a potential wife and young mother in her 20's to have the healthiest children with right? It's changing demographics forced by unfortunate financial/ economic realities? Anyways, hope this little opinion help to create this new category in the new year? Cheers, PaulB
PaulB