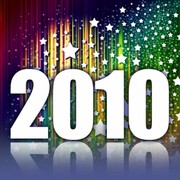 New Year's is the oldest of all holidays; first marked around 4,000 years ago, close to the year 2000 BC. At its inception however, the New Year was marked by the first new moon after the Spring Equinox, a logical time to celebrate, both agriculturally and astronomically. Celebrating New Year's on January 1st however, is completely arbitrary, due to the tampering of the Roman calendar by various emperors. In 153 BC, the Roman senate declared January 1 to be the beginning of the new year in order to set the calendar right. However, the tampering continued until 46 BC, when Julius Caesar established the Julian Calendar. Again it marked January 1 as the new year, but in order to re-synchronize the calendar with the sun, Caesar had to let the previous year drag on - for 445 days! Besides Valentine's Day, New Year's Eve tends to be one of the most idealized holidays. Toted by the media as the biggest party of the year, and coupled with the fact that it does mark a significant passage of time from one year into the next, there tends to be a lot of pressure to have an amazing time that you'll never forget. The stories of people becoming engaged or married on Jan. 31st don't help New Year's Eve's fairy tale reputation either, but in all honesty, when was the last time you remember New Year's Eve living up to this reputation? Setting our sites on a more realistic New Year's Eve will certainly help us wake up with a smile on our face on Jan. 1st... Tips for a fun New Year's Eve 1. BE REALISTIC. Just because there's a lot of media hype doesn't mean you should make New Year's Eve into something it's not. Expecting it to be more than it is will only set you up for disappointment. 2. Stay positive. Don't let your past New Year's disappointments get in the way of having fun this year. Don't put pressure on yourself to top last year - it's not a competition! The whole point of New Year's is healthy reflection on the past to move forward into a better future. Keep a positive attitude and go with the flow! 3. Make sure you're all on the same page. It's important that everyone you're celebrating with is in agreement on how to celebrate - have a plan. If one person wants to have a chilled out night at home, and someone else wants to go to a big party at a club - you may be setting yourself up for an irritating New Year's Eve. There's nothing worse than a wet blanket on New Year's. It's probably better to spend New Year's apart in this case than one person ruining it for everyone else. 4. Pace Yourself! New Year's and drinking tend to go hand-in-hand - it's the one night where getting obliterated tends to be socially acceptable. However, if you don't pace yourself, you could be ushering in the New Year passed out! 5. Be responsible. This goes for binge drinking, one night stands, drinking and driving etc. Remember that you owe it to yourself to end the year on a high note, not in a way that could hurt you or others, and not in a way that will make you feel embarrassed or ashamed on Jan. 1st!! 6. Have fun - that's what it's all about!
Tags: New Years  Valentines  positive  fun